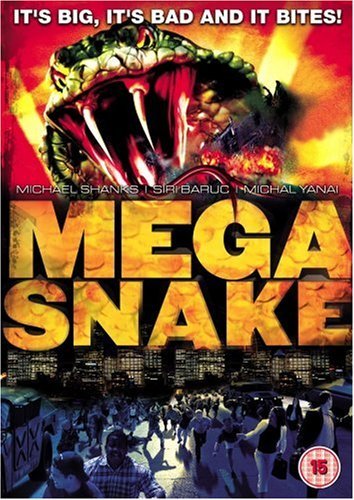 Oh, and shed skin scenes. Discovering one might also happen in "Anaconda" but I don't remember - maybe the hunter in "Anaconda" was already carrying it.

The great snake kitbash brings only the rampage at the fair that's almost new. That, and maybe disjointed attack scenes.

Oh and very poor characters - much worse written than the characters of "Python" and "King Cobra", and even the expendable victims of "Anaconda". Here, the protagonist's brother, for example, mocks the protagonist, blaming their father's death on him at an otherwise casual moment, while the police antagonist is nowhere near as likable as his counterpart from "Python". The Sci-Fi Channel would not have the budget of Snakes on a Plane, so they could only afford one snake. But, it was one huge snake! I was not expecting anything fantastic when I tuned into this. I was surprised, however, that it kept my interest.

I really like the part where the dude looked up and the snake just sucked him in by the head. I also liked seeing the Barney Fife deputy getting it, as well as the rednecks.

It had it's Jaws moment when they mayor wouldn't shut down the county fair and the snake had a sm旦rg奪sbord of delectable goodies.

Of course, having a small town deputy with a PhD in zoology was just a little far fetched, as was having the guy who was afraid of snakes saving the day and his girl, but what the heck, it was a movie.

Not the greatest, but it was worth the time. No big stars, but I'll be looking for John T. Woods in Zombie Strippers out soon.